Certain species of eternity  – Michael Pisaro, 1996, for one player and one sound [four consecutive versions]

description
In April or May 2010, among the different ideas we had when we started these concerts of experimental scores, we contacted some composers from the Wandelweiser collective, whom we knew for their recent relation with a contemporary area of improvisation.
A few days after we had written to them, Manfred Werder, Antoine Beuger and Michael Pisaro sent us a happy and enthusiastic reply, and all of them generously sent us some scores for us to perform.
This concert is in gratitude to their disposition, kindness and support.
Having said this, and proceeding with a brief description of the concert for the online audience, we believe it is necessary to include some characteristics of our enterprise.
We are absolute beginners in these matters. On one hand these scores allow us something we’ve never had: to know them through the actual performance, and not merely hearing the recording or studying the score. Their utterly simple instructions, the clarity of thought and the multiple ways of performing them, lead to a new kind of virtuosity: Listening and Collaboration.
We’ve surprised ourselves with these work’s demand not solely for a radical state of concentration, but for a maximum inquiry on what is concentration in the first place, what should it be applied to: is it fixed, hooked to a point, stable and always the same or moving and ever changing, at an indeterminate speed but very fast, going everywhere and jumping from one sense to the other?
Thus, we insist, we are absolute beginners: while performing Encounter (1), we listened to the sound of our bodies (the soft machine), we forgot to breathe or wondered whether we should do it or not, which is obviously ridiculous.
Am I playing too loud? Is this sounding correctly? Should I be here and now all of the time? Is it too long, too extremely long? What should I listen to? Should I like it? What is the idea? What is the Idea?
Maybe the right question would be:
If you don’t know, why do you ask? (David Tudor)
NCD

We are grateful to Dani and Joaco for their presence at the concert.

Encounter (1) was performed in a room in an apartment. We used an agogo bell, a guitar harmonic, an accordion tone or key and a double bass bowed string. The rest of the sounds one can hear belong to the bodies of the people in the room, the birds and the people in the open space between the buildings in Santa María and Bellavista, or the distant sound of traffic. The evening’s light remained stable during the 40 minutes.

The Hinwandeln + Quelque chose qui nous attire, performed with a double bass, accordion and violin, aimed at making a transition between the two pieces with a minimal differentiation, in order to clearly convey the idea of both works without changing the music’s texture. When we begun dusk was on its way – by the end of the second piece it was already dark.

Number 21 from The Collection (“find a soft sound and maintain it for up to five minutes”) and Un lieu pour être deux where performed with percussion instruments, a melodica mouth organ and different bottles. Both players where lit by a small flashlight, which created a subterranean feeling in spite of being on a roof.

Three drops of rain / east wind / ocean was performed with a guitar and violin – maybe the only thing which remained from the title was the east wind, which made it necessary to use clothes pegs in order to keep the score on the music stand. In spite of the barking, the music was an intimate gap in an open space.

The different versions of A certain species of eternity where performed with a carton board, a bottle against a staircase, double bass and radio static. These were merely attempts at reading a very demanding score, tryouts more than a performance in its own right. The sound is different because these were performed indoor, under the water tank at the end of the staircase.

piano & strings (harmony series #9) ended the concert. The four musicians, with their backs towards Bellavista Avenue, used a guitar, violin, accordion and radio static, the tone was B, the bus  was #503. 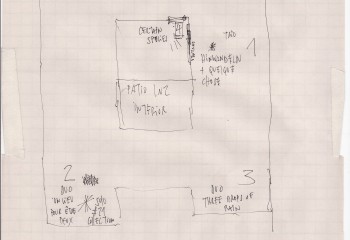