“What ultimately interests me is the situational declination of the event, not the entrenchment or trascendence of the event itself”
Alain Badiou

Four activities with ala1RECS&arsomnis in Santiago de Chile aimed at challenging our musical practice.
The central compositional questions are in fact the questions of how people coming together for music.
Some musicians meet at a place: Their number forms a structure of being together, a structure which through its necessary transparency let not only the place but something like the intrinsic reality of the situation appear.
The intrinsic reality of the situation has no function.
It would be something like everyday life which occasionally demands an unexpected agitation.
Maybe this is the initial moment of a situational declination of an event.
Everyday life, days off alike.
MW, April 2011

The Sounding of the World

Translation by Nicholas Melia. Published at Sounds of Europe, 2011.

It is possible to conceive of music as the totality of all sound [Gesamtheit alles Klingenden]—a totality far exceeding the thin sliver audible to man.

This totality of all sound—of which we are part—is the sounding of the world.

To hear this music, conscious of the presence of all sounds that remain inaudible to us, is to be filled with a great joy comparable to that which arises in viewing an affecting landscape.

Of course, such a music is wonderfully chaotic, and to draw a comparison with the landscape is, perhaps, questionable, since the act of hearing is, for humans, related more strongly than the act of seeing to a primordial survival instinct. The act of hearing repeatedly exposes the human to the threatening chaos of the world.

It seems that the act of articulation of sounds is primarily concerned with the act of hearing [eine Ebene des Hörens]: an act in which humans hear themselves and their actions in relation to the sounding of the world.

This is how I hear, with every sound emerging in its own place, in the interaction between the articulated sound, its place, and myself.

Immersed in this mixture, I sense a beautiful magnitude of sounding, of surface as well as depth, as one might feel in the midst of a primeval forest.

There is nothing that does not interact and therefore all exists in relation. Indeed, perhaps the idea of a place still evokes too forcefully the notion of a discrete entity.

When I hear an articulated sound; when I hear my own sensation of this sound, a place appears—rather, relations emerge, between the most varied of beings and things encountered and encountering each other.

We might think of the “representation of music” as an encounter that concerns in particular the act of hearing. This tentative description is essential, since there is no distinction between the act of hearing and any of the other senses.

Some beings and things encounter each other, and their sensory worlds, regardless of their appeal to human senses, dissolve and actualize.

It is therefore not an issue of encountering. The encounter has no function: it occurs regardless. In an encounter that tends towards the act of hearing, it is not a question of establishing a representation; rather, it is about harnessing the potential to encounter in a general and determined relation.

This general and determined relation—a global regulation of a single phenomenon on common ground—is what initially permits an encounter to be actualized; since phenomena emerge and interact as such—rather than as ideas—until they submerge.

In an encounter that tends towards the act of hearing, I do not therefore contribute anything, but, rather, actualize the relations between those beings and things that concern me.

In the absence of articulated sounds, I become increasingly dissolved into the sounding of all encounter [das Klingen aller Begegnung] and experience a being-world; in the very moment of articulation, in a moment of growing awareness of myself observing this articulation, my consciousness of the human condition takes place: Being world and observing the world.

I would like to relive this moment again and again, devoting myself to the qualities of the encounter—the indeterminacy of the relations from which the world emerges. 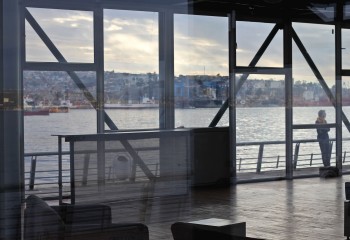