ascending series 3 is a score written for a group of musicians set on an outdoor site or a room open to the outdoors. The score describes a type of adequate site (nice enough to spend  a long time in it, and in which the sound of the instruments doesn’t be constantly drowned by the surroundings’ sound); also it gives the materials with which it must be done a specific arrangement for a particular realization.

Without the decisions that produce an arrangement and define the balances of a given musical situation, the score is merely a collection of unrealized objects.

The materials consist of:

(1) a flexible schema of sections: seven 10-minutes interludes and in between them six zones of “environmental harmony”, whose duration depends of the total duration decided for the realization. This flexible schema can be displayed in any duration between 310 and 490 minutes.

(2) three activities for the six environmental harmony zones, available for all the musicians: listening; playing a sound (with an object or an instrument) that harmonizes with one or two of the surrounding sounds; sustain a tone (of two given tones, specific for each one of the six durations), very softly, because «these tones are meant to be just the slightest indication of an ongoing ascent».

The musicians set themselves in a corridor in the middle of the cemetery, oriented approximately north to south, which allowed to propose a porous situation: the musicians ―and occasional visitors―  got in and out of a work zone or in and out of a music’s proximity.

The afternoon passed without mishap, at the sun and  ―sometimes―  with plenty of wind, which can be heard punishing the microphone’s diaphragms of the recording devices[2].

In the same way that the piece propose the emergence  of the Interludes as seven discontinuities in the middle of a sustained and continuous duration (which is the duration of a site), the cemetery, embedded on a Valparaíso’s hill, maintains itself at the same time, geographically in the middle of the city but afar, because its high position attenuate and filter much of the noise made by it.

In the context of Festival Tsonami, the piece was announced as an intervention. Some of the features described above confirm it, while intervene supposes  a meaningful gesture, big-sounding sometimes, that calls for attention. However, those who transited about the realization of the piece faced little but a prospect of a realization: a group of people sitting front a row of gravestones, with nothing much to do but play a slight sound rapidly absorbed by the remote surrounding sound. But there was intervention, even if it took place in the almost indistinguishable porousness of the situation.: it was not the site or the public space (the only one, apparently, to which the interventions occur) what was been intervened but, most of all, those who cohabited with the work and the site; their patience, their wandering or auditions were put to work. Even though some of the attendants refuse to this work, others  ―more placidly―  gave themselves time for the work to work them a listening, a collective situation.

Maybe a work that produces these porousness demands a kind of fidelity (musical, or political), there where the work opens a site being faithful to a situation defined by a score: a demand like that is not a de facto situation, but a problem to set (to, in a) work.

[2] The audio recordings were conducted without professional equipment. 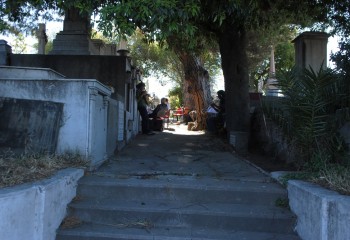