description
The 3 players created a score to be used as a module for the total length of the work which is divided in three 60 minutes movements.
Each player used the three scores and at a given point inserted ad libitum a solo: Sekundenklängen by Antoine Beuger on acoustic bass, 2008(4) by Manfred Werder on violin and Only (Harmony series #17) by Michael Pisaro on accordion.
Primer Camposanto finished with hinwandeln (zwischen Himmel und Erd) by Michael Pisaro performed by the trio (pages 13, 11, 15, 3 and 2).
The recorders/players had a personal score which determined their actions: amount, moment, position, etc. (see Camposanto Score.pdf)
The performance began 30 minutes late, thus there are no recordings belonging to the first half of movement I.

Segments were recorded by Álvaro Ortega, as required by score; assembled by Nicolás Carrasco [note: segments are separated by 20 seconds silences.]

Audio (as required by score) by Sebastian Jatz Rawicz performing Only (Harmony series #17) by Michael Pisaro recorded on a Sony ICD-P210. 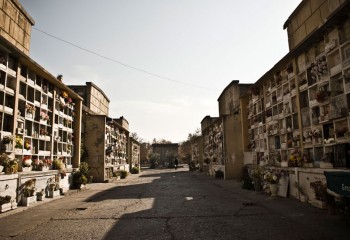