context
The Department of Arts invited & to a residency on campus during the month of April 2012. The execution mode agreed proposed the realization of a series of works one day per week, in order to carry out a total of four days for the month. Each day was to have various realizations of one or more related composers: the first day we actualized a work by composer Manfred Werder, the second was devoted to pieces by Wandelweiser group composers, the third day was for works by members of &, and the fourth and last day was dedicated to works by John Cage.

Manfred Werder day – Wednesday, April 4th
We started the residence playing twenty four pages of vier ausführende (four players) by the composer Manfred Werder. The whole work has four thousand pages, which must be realized in one succesion, without repeating any page; it began its performing in 2000.
We played the twenty-four pages in three interventions, always in the same spot in the “glass box”. Each included an execution of 8 pages, corresponding to 64 minutes.

Wandelweiser day – Wednesday April 11th
The second day was devoted to Wandelweiser group. We played six works by six composers . In three different times, each of the three interventions included the execution of two works.

nariyamu was executed by Santiago Astaburuaga on electric bass and Sebastián Jatz accordion.
exact dimension without insistencethe was played by Nicolás Carrasco on violin and Álvaro Ortega on radio.

The actualization of the work of Manfred Werder had two sections. First listening in the gardens. For this we invite Tambores Delon. We stood on the site about 15 minutes and captured a six minutes audio with a digital recorder . Then we moved to the “glass box”, where we spent 8 minutes in silence, listening. After that time we proceeded to play the recording we had done on the outer space.

In the gardens of the faculty & performed the work of Álvaro Ortega. Nicolás Carrasco used a bottle and a violin, Sebastian Jatz accordion and objects, Álvaro Ortega radio and agogo, Santiago Astaburuaga on radio. The construction of a nearby building, the presence of an airplane and the constant sound of the sprinkler were part of the making of the work.

intemperie #5 proposes to execute a number of chords equivalent to the number of players participating, and in turn the same number of successive execution sites. Therefore a quartet version required playing a chord four times in four different places on the campus.
The work was done by &.

To close the day, & played the second work of La perpetuidad del esbozo (“perpetuity of the outline”) series by Santiago Astaburuaga. For this concert we had three guests, who together formed a septet with &.

The fourth and final day of our residency at the University of Chile was dedicated to the composer John Cage. We made a new version for Radio music and for Cartridge music (works that have been played in the past by our group). At the end of the day we performed a concert with Edén Carrasco as guest playing one⁷, a quintet version for 4’33”, and a new version of four⁶.

15:00: Outside – park and corridors of the School of Arts, parks, gardens, Faculty of Science

Each one performed and recorded four successive solo versions in four spatially separated locations. After performing each of the four parts, each one had a 6-minute pause to walk, with the recorder still running, to the next site. The total duration of the realization was 42 minutes.
The executions of the work were at 15:00, 15:12, 15:24 and 15:36 respectively.

& performed this work in a version for four cartridges and four musicians with objects.

The concert began with Eden Carrasco playing one⁷ , using a prepared alto sax and a hose. Then & joined to form a quintet to play 4’33”.

Finally & closed the day with the execution of the work four⁶: Santiago Astaburuaga on prepared electric bass, Sebastián Jatz on accordion, Álvaro Ortega on various radios and Nicolás Carrasco on violin, objects and a recording.

Access to the following item has been disabled following receipt by Internet Archive of a copyright claim issued by Editions Peters, September 2017.

Access to the following item has been disabled following receipt by Internet Archive of a copyright claim issued by Editions Peters, September 2017. 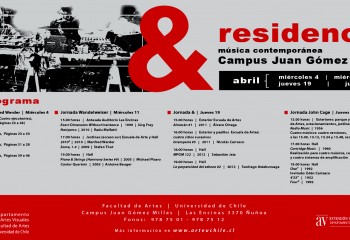