description
vexations by Erik Satie was apparently written for piano around 1893. The work consists on a theme in the left hand interspersed with two variations of chords in the right hand. The score indicates: “To play 840 times in a row, it would be good to prepare in advance in total silence, through serious immobility.” The work was not published or performed during the Satie’s life. It was published in 1958 and premiered in 1963 by John Cage at the Pocket Theatre in Manhattan, New York. Since then it became ‘de rigeur’ to follow exactly the indications for the score, the work being performed by various pianists in long marathons.

We issued a call that brought together 32 pianists interested in participating in the premiere of the work in Chile. The setting was the National Museum of Fine Arts (which for the first time in its history left their doors open all night long) and the time set for the play 840 times in a row was 28 hours. The piano was located in the central hall of the museum, alongside the permanent collection of statues. The music started playing at 15 PM on a Thursday and ended at 19 PM on a Friday.

Each pianist played the work with his own signature: the pulse, joints, dynamics and phrasing that emerge from the structure of the score generated the proposed continuous concert, but careful listening revealed details, variations and modulations that every pianist experienced through repetitive execution for long periods of time. The approximate time of theme and variations is two minutes. The period of execution of each pianist varied between 40 minutes and 100 minutes.

During the 28 hours we conducted a series of audio recordings: each one should last about the segment of song duration (two minutes) and could be captured from anywhere in the museum or from outside it. The only condition was that at the time of recording could be heard, even if barely audible, the execution of the pianist. The recorded segments are being played back in random as you read this text.

For the production of the performance Marco Colasso did a complete audio recording; Julio Escobar did the design and installation of lighting; Ronald Patrick, Tatiana Wolff, Alondra Rodríguez and Marisa Child took pictures of each one of the pianists; Juan Ignacio Bello and Aplaplac (Álvaro Díaz, Francisco Schultz and Bautista Martinez) did two different video recordings; Andy Dockett did a promotional video and Gonzalo Ramírez designed the poster and website.
SAP

audio
Segments recorded by Santiago Astaburuaga, Sebastián Jatz, Nicolás Carrasco and Álvaro Ortega from different spots and relative distances from the piano. Each segment captures a repetition of the score. The AudioPlayer will perform a random sequence order of all 44 segments. 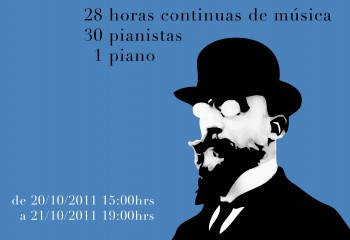