In a programme note in 1980 Tudor describes Rainforest as a resonating electroacoustical environment. [Note on programme for Für Augen und Hören, Berlin, 1980]

Each musician must design some object-speakers through which he may send electroacoustic signals. Each object, or material with a given shape, has certain acoustic resonant characteristics which are revealed when it is activated physically – like knocking a door with your knuckles or exciting it by a specific frequency, the latter being the content of this piece. Usually the signal is colored by the object and is made audible through it – exceptionally, the signal will make the object itself audible. Thus, each musician has to experiment with techniques and mediums to resonate an object, as well as finding and testing objects in order to select those which have better resounding qualities. Tudor said that Rainforest was a piece that “teaches itself.” [interview, March 1995]

When all the technical and sound demands are met the group must arrange within the given performance space the environment that these objects will create, placing the tables for each musician’s equipment so that the audience may move freely, exploring the sound phenomena.

The month we had for preparing all this – with scarce lights or clarity, and naturally no budget – went along parsimoniously with the investigation described in the first paragraph. The following paragraph was solved in the last hours before the performance took place on Tuesday 23rd.

Besides the noted scheme which shows the basic apparatus needed to create an object-speaker, our references were taken from some audio versions and texts written by musicians who collaborated with Tudor – John Driscoll and Matt Rogalsky – who wrote down the oral wisdom pertaining to this piece.

It’s 21:00 at the Sala Nois in downtown Valparaiso. You enter the room by a sill which leads to the street and descends through a staircase into darkness. The room, an old dock warehouse which had a brief life as a session or party place, looks now like the sketch of a disco.

A few minutes after the resonating electroacoustical environment begun we realized we hadn’t taken into consideration the other half of the piece: the audience.

They – maybe in their “own right”, or by default, considering the lack of impeding signs as an authorization sign – begun to strike and play with the objects, all of which were amplified. For the following 90 minutes the piece came and went. At times a resonating electroacoustical environment, at others an ad lib percussive session.

Maybe the idea of a work presented as an installation rather than a concert piece inflicted violence on the audience – proscenium, pit and seats were obliterated – not knowing how to locate themselves in this unstructured situation. Or maybe this was the audience’s revenge after 300 years of solid division between the musicians and the audience. Or we musicians became a structural dissonance without resolution, that is to say, we weren’t needed there. Or the people of Valparaiso is so latin and fiery, as the photographer Ormazával said, for this would not happen in the capital city. Or maybe we should have hanged signs which said DO NOT STRIKE, JUST TOUCH. 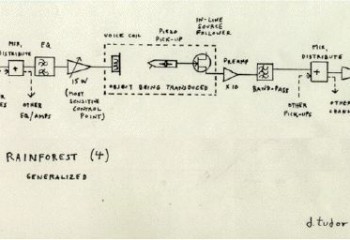